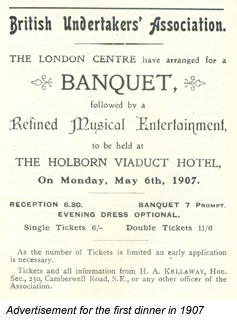 The London Association’s annual banquet is the longest-running social function for funeral directors in this country. Over the years this convivial gathering has always attracted a large number of guests who have enjoyed generous hospitality in opulent surroundings. This short history tells its story. 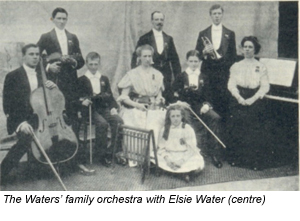 The London Centre of the British Undertakers’ Association (as the LAFD was then called) held its first dinner on 6 May 1907 at the Holborn Viaduct hotel. In the unfortunate absence due to illness of the London President, James Hurry, the chair was occupied by Alderman Herbert Hollick Kenyon of JH Kenyon. Frederick Field was the vice chairman. The President of the BUA, Henry Sherry was in attendance and after the toasts he spoke of the achievements of the Association since its founding in June 1905. The gathering was then entertained to a programme of music performed by youthful members of the Waters’ family. Charles W Waters was an undertaker and coffin manufacturer in Bow, east London and the small instrumental ensemble (two violins, two violas, cornet and piano) was conducted by none other than his daughter, Miss Elsie Waters. Then aged thirteen, in years to come Elsie and her sister, Doris, would form a duo that by the 1920s had acquired celebrity status in the music halls. Their brother Jack, who later changed his surname to Warner, became a familiar face as the policeman in the 1960s TV series, Dixon of Dock Green. 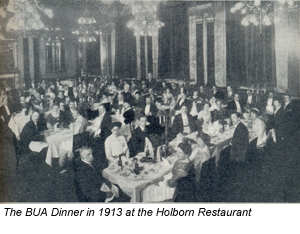 The names of the 36 attending the dinner form a roll call of luminaries from the London funeral trade; many of the names can still be found today. Messrs Nodes, Sherry, Kenyon, Bond, Kellaway, France and Crook and were present along with others whose businesses have been consigned to history. Tickets were 6 shillings or 11 shillings and sixpence for a double ticket. Following its success, the London Centre decided to make the banquet an annual occasion. In 1908 under the presidency of Frederick Field the event was once again held at the Holborn Viaduct Hotel with music provided by Mr EW Waters’ Bijou Band. The evening concluded with the singing of Auld Land Syne.

In 1910 the Holborn Restaurant became the venue for the annual dinner. 100 members of the Centre gathered on 31 March and were serenaded by the Waters’ family in addition to The Merrymakers Quartette. Reputed to be the largest and also the last of the grand Edwardian restaurant blocks, diners found themselves in palatial surroundings at the Holborn Restaurant. Built between 1883-5 it contained twenty-one banqueting rooms, fourteen restaurants, numerous private dining rooms and three Masonic temples (with pipe organs). The sumptuous interior was decorated with marble from the Pyrenees, enamelled mosaic, majolica and stunning chandeliers. The Annual Dinner continued at this location until 1920 when allegiance was shifted to the nearby Connaught Rooms. Sadly, the Holborn Restaurant was demolished in 1955. An image included here of the 1913 dinner only hints at the splendid interior of the restaurant. On that occasion guests enjoyed:

This was the last social event before the Great War and it would be February 1919 before a ‘London “Victory” Dinner’ was held with FE Smith of the London Necropolis Company as the president of the London Centre. Charles W Tait, the BUA president and well over 100 guests were present when Harold Kenyon proposed a toast to, “The Imperial Forces.” A hat collection for BUA funds raised £38 6s before a Miss Dalby sang a selection of songs including, “Tommy comes marching home.”

For the next twenty years the banquet continued annually with attendances increasing each year. In January 1924 some 300 were present at the Hotel Cecil; a similar number attended four years later at the Hotel Victoria on Northumberland Avenue. HN Allen of Farebrother’s in Kingston was the London president with TL Pakeman of Bristol the BUA president. Entertainment was provided by Robert Easton who sang Mendelssohn’s “I am a Roamer” and a sea shanty before dancing to Sidney Jerome’s band and cabaret by Gordon Marsh and the Marshmallow Girls.

At this dinner an amusing incident occurred, as The Undertakers’ Journal reported:

General Sir and Lady Newton were announced and hospitably received by Mr and Mrs Allen. They then proceeded to the dining hall but failed to trace their names at any of the tables. Upon further inquiry it was discovered that the function at which they were both expected was at a different hotel altogether. Both entered into the spirit of the thing heartily and were not in any way disconcerted at having been received at a gathering of undertakers. 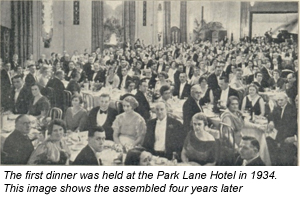 From 1928 the annual dinner remained at the Hotel Victoria until a move was made to the venue that is now recognised as ‘home’ – the Park Lane Hotel. The event was first held here on 9 March 1934. Once again, over 300 joined the London president W Oliver Nodes for the customary reception, culinary extravaganza, toasts, speeches and entertainment; on this occasion the latter was provided by Jack Upson’s Band and Harold Lawrence with his Silver Wings Cabaret.

Construction of the Park Lane Hotel commenced in 1925 and was concluded two years later. It was the first hotel in London with a bathroom in every room. In Sir Nikolaus Pevsner’s architectural guides the ballroom is described as ‘…one of London’s best Art Deco spaces. Silver, mauve and pink colours; mushroom columns; scrolling and scalloped motifs. Decoration includes paintings…of nymphs and wild beasts.’ Park Lane Hotel has been the home of the banquet for most of the subsequent period..

In 1935 The Undertakers’ Journal included a photograph of those gathered for the dinner on the 18 January. On this occasion Mr H Leverton was toastmaster. Regrettably, no pictures survive of the entertainers: Fragson and his cigarettes, and Avant Bros, the comedy acrobats. It would be the last time the event was held under the auspices of the London Centre of the BUA as, at the conference at Southend in June of that year, the name National Association of Funeral Directors was adopted and the ‘London Association of Funeral Directors’ was born. 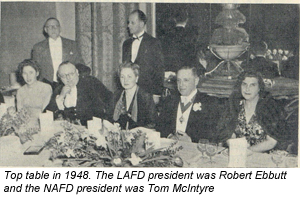 However, once again war interrupted the annual gathering. After the banquet on 9 March 1939 the event was not resumed until February 1947, when Robert Ebbutt was the president. On this occasion cabaret turns were provided by Two Maroons (footwork funsters), Stella Scott and her banjo, and Fabian Foot (baritone) and music by Jack Upson.

By 1950 attendances were back to their pre-war numbers. 350 people joined London president W Durham Kenyon along with a fellow Londoner as national president, James James-Crook, while in 1953, the president’s wife, Mrs Harold Rivett encouraged some 300 diners to contribute to the National Flood Relief Fund, responding to events of  January that year.  Deep snow greeted guests as they made their way to Park Lane for the 1958 dinner with Oliver Nodes as London president. The attendance record reached an all-time high in 1967 when 400 ‘…enjoyed a wonderful evening of good fellowship and good fun liberally laced with the generous hospitality for which the London Association is well-known.’

Over a hundred years on, the annual dinner (now described as the ‘Annual Banquet and Ball’) continues to occupy an important place in the Association’s calendar. It is always well supported by the London membership along with members of the NAFD and guests from all over the country. 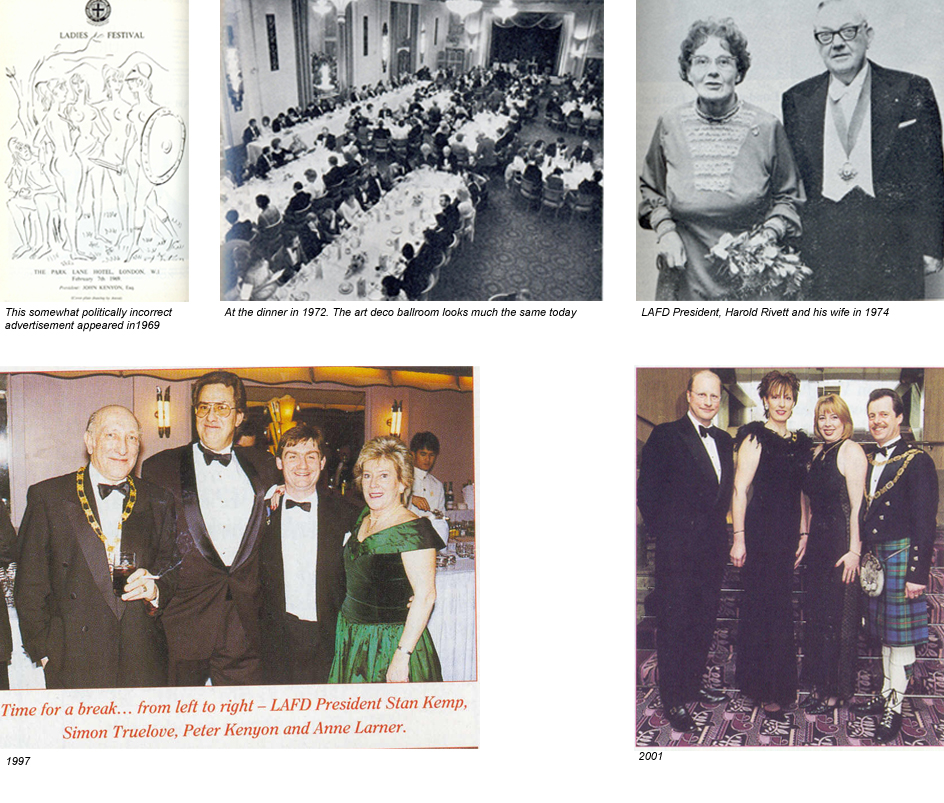