A BRIEF HISTORY OF LAFD

The British Undertakers Association, a trade association, was founded in 1905, within which London members formed the London Division. Many of the firms involved are still members, although not all remain under the same family control.

From the outset, London Division was particularly active, with much early discussion on the simpler ‘New Funeral’. An early initiative, to demonstrate a funeral could be obtained from any Member at a fair and reasonable rate,was the publication of a maximum funeral cost. In 1923, the revised agreed rate for a full basic Elm coffin funeral with “machine coach or car and pair” was £8.0s.0d. Interestingly, the same price pertained 12 years later, at the time of the Association’s name change.

LAFD became the only part of the National Association to negotiate with the Union and be an official Employers Association. Indeed it was a London member who, feeling strongly that the whole trade would benefit from providing better rewards and conditions for their staff, assisted in the formation of the Union itself. Typical working hours at that time were based on a 6 ½ working day week!

LAFD still remains a strong and active Association devoted to the particular needs of the funeral profession as a whole in London and the Home Counties . 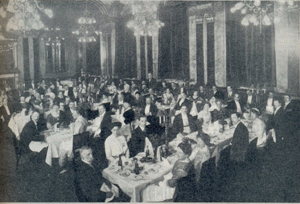