AGM and Education Prize-giving 1st May

The 74th Annual General Meeting of the Association was held at Amba Hotel, Charing Cross.

70 attendees were welcomed by President Richard van Nes, who thanked the Executive Committee and members for their support during his thoroughly enjoyable year in office, during which he had proudly represented LAFD at a variety of events.

A highlight of his year had been the very successful, royal-themed, Banquet & Ball, in February. Earlier in the day, the President had delivered a cheque to his chosen charity, The Household Division Charity, in respect of £5,000 raised from the raffle and auction at the Ball.

The Executive had had a busy year. Richard highlighted the Association’s new involvement in the London Mortuary Managers’ Group, its ongoing committment to the London Funeral Liaison Group and activities, supported by NAFD, to oppose Councils’ unfair trading practices.

Members received updates on recent legislative developments and changes to Health & Safety guidance and on matters of national interest and developments being addressed by NAFD.

Western District Chairman Michael Tiney reported on its recent activities. The 10th Anniversary Casino Night party, on 5th April, had been a great success.  The District had a new Secretary, Victoria Kibble.

New Southern District Chairman, Tony Pearson, reported on the recent AGM and changes to the local Committee, introducing his Vice-chairman and Secretary. 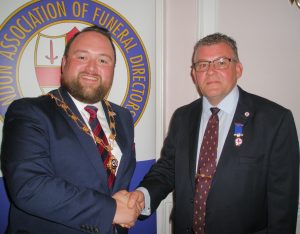 Changes of Officers of the Association were celebrated during the evening,

Richard passed on the chain of office to new President Adam Ginder.

Graham, a Past President, retired from the Committee after many years’ valuable service.
Richard presented Graham and his wife Sue, both Honorary members of LAFD, with a token of his thanks for their support.

LAFD’s Education Committee had been busy in recent months.

A cohort of students were awaiting their results from the Certificate in Funeral Arranging and Administration examination at the end of March.

The latest CertFAA course had started in April.

The first course to be held in the South of the region had completed in November 2018; during the meeting, 15 of the 18 successful students were presented with Certificates and lapel pins.

Passed with Distinction, and winner of the President’s Award for the highest mark in the exam, was Julia Killick of J&R Killick 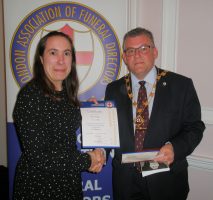 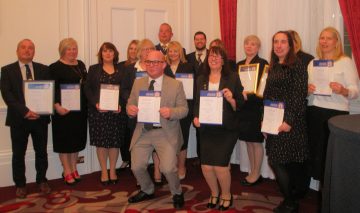 Also successful, but unable to attend the presentation, were Jacqueline Oliver of Lodge Brothers (Passed with Distinction) and Gareth Revell of J&R Killick and Kelly Smith of Funeral Partners (both Passed with Credit).

Congratulations to all eighteen!