Each year the Association raises funds for a charity selected by that year’s President.

On 1st May Richard was delighted to visit Horseguards to present the charity with £5,000 raised at the Banquet and Ball in February, supplemented by a further £200 from Western District’s Casino Night Party. 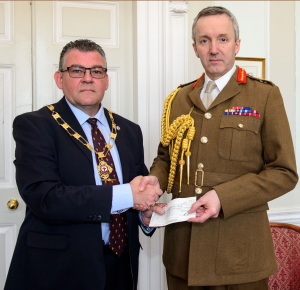 The cheques were received on behalf of the charity by Major General Ben Bathurst CBE.